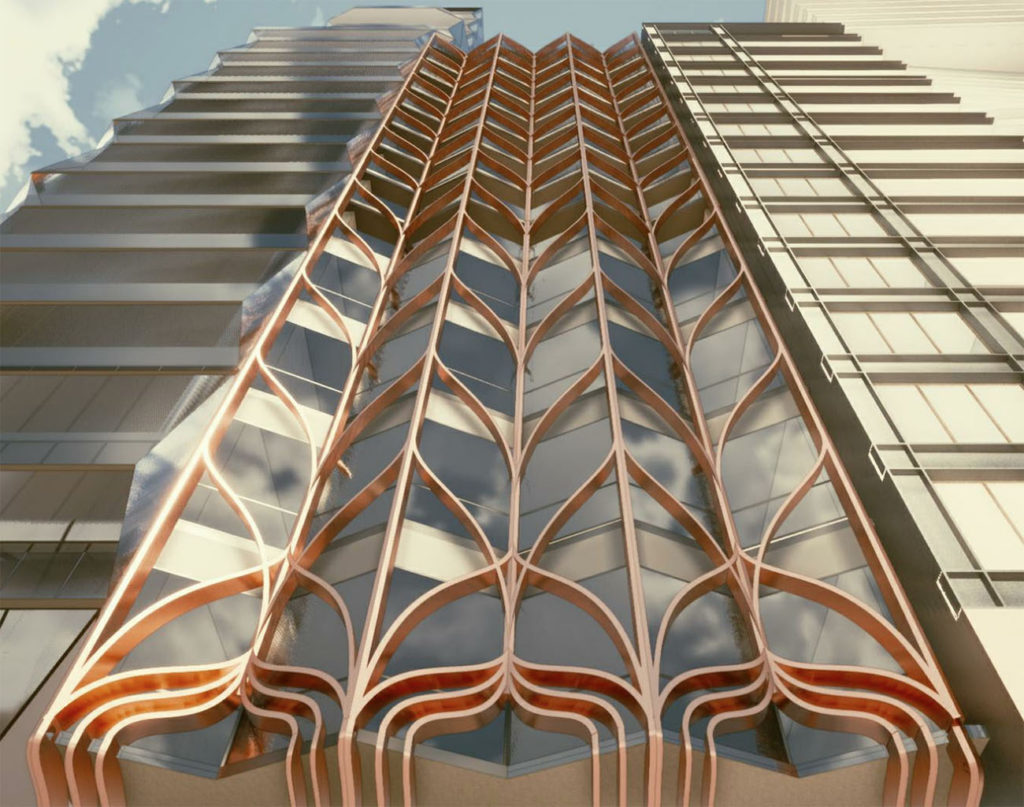 Plaza Partners recently announced applications for several new developments across the GTA. Here’s a look at what local and industry media have been saying about the future properties.

“The luxurious looking building seems like a mix out of something you’d find in Las Vegas or New York City’s Fifth Avenue. Walking the line between elegant and extra, it will be interesting to see just how much this city continues to change as it begins to open up again.”

“The new high-rise intends to follow the existing development patterns along Bloor Street West by covering the full width of the site. Various architectural setbacks are included throughout the tower to make room for recessed balconies located behind the building’s decorative architectural feature.“

“208 Bloor West’s southern elevation is shaped as two full and two half bays that project southwards, with a copper coloured filagree lattice giving texture and sheen to what will presumably be a luxury product.”

Urban Toronto: Plaza Proposes 28-Storey Condo Across from the ROM

“The proposed development’s distinctive architectural approach and high-quality materials will create visual interest and reinforce the unique character of this section of Bloor Street West, to further transform the site and contribute to the ongoing evolution of one of Toronto’s most iconic streets.”

“The building seeks to frame and define the street edge, providing a comfortable public realm and supporting the proposed retail spaces. The second level overhang along the Dundas Street and Milan Street frontages would provide at-grade weather protection for pedestrians and retail patrons.”

“Though the project is in its early stages, it’s already set to have amenities such as a dog wash room, as well as nearly 5,000 square feet of total indoor and outdoor amenity space, including a segment of the top floor — potentially a gym or party room with the best views in the place.”

blogTO: Convenience store in midtown Toronto to be redeveloped into boutique condo building

“A total of 300 m² of residential indoor amenity space is proposed on the ground floor, contiguous to outdoor amenity, and another 181 m² is provided on the 2nd level (with 85 m² of outdoor amenity). Four levels of underground parking are proposed with spaces for 150 vehicles, and 160 bicycles.”

“Among notable design features, Dupont Street is met by curvilinear forms on the first level, including a projecting canopy that would shelter retail patrons and residents. A 340 m² POPS (Privately-Owned Publicly accessible Space) formed by the building’s generous setback distance from Dupont provides a landscaped place to sit and interact with others, and with a public art piece to be chosen for the spot indicated.”

Stay tuned for more information on each property’s evolution in the coming months.

Let's get in touch

Give us a call or drop by anytime, we endeavour to answer all enquiries within 24 hours on business days.

Give us a call or fill in the form below and we'll contact you. We endeavor to answer all inquiries within 24 hours on business days.